434 billion! The total assets of more than 600 billionaires have skyrocketed! Can the epidemic be unstoppable?

Abstract: As the US 2020 general election approaches, Trump's advantage gradually weakens. Under the influence of the epidemic, the signs of the US economic recession are very obvious, and the unemployment rate is also very serious. Under this background, the public has begun to question Trump's ability as a president.

May 25th As the US 2020 election approaches, Trump's advantage gradually weakens. Under the influence of the epidemic, the signs of the US economic recession are very obvious, and the unemployment rate is also very serious. Under this background, the public has begun to question Trump's ability as a president.

At the same time, the latest poll shows that voters' support for Trump's work against the new crown epidemic is still declining. The election model released by Oxford Consulting in the United Kingdom shows that Trump will be defeated due to the economic recession. This is also the main reason why Trump is anxious to open the United States and will not close the United States even if there is a second wave of outbreaks.

According to the US Fox News report, the results of the poll published by Quinnipiac University show that the popular candidate Biden's support rate in the general election is 11 percentage points ahead of Trump, and half of American voters will vote for Biden Only 39% of voters will vote for Trump. In the university ’s April poll, Biden led only 8 percentage points. The conclusion at the time was that Biden would win the election steadily. Now another month has passed and Biden has become more stable.

This is a very bad signal for Trump. April is the peak of the US epidemic. The epidemic in May has eased and the 50 US states have opened up. It stands to reason that Trump ’s approval rating should be It was only right to pick up. As a result, Biden did not expect the approval rate to rise, but Trump continued to decline.

In addition, there was a recent incident directly related to the election. Former Ukrainian President Poroshenko exposed a recording of calls that was extremely unfavorable to Biden. During his tenure as Vice President, Biden used U.S. The loan, which pressured Poroshenko to dismiss the Attorney General of Ukraine at the time, not only hit Biden, but also put a coat of justice on Trump's "call door". However, even if Trump used even such a vicious move, he still failed to reverse the situation.

The most desperate thing for Trump is the election model of the Oxford Consulting Company in the United Kingdom. The model shows that the economic recession caused by the epidemic will make Trump encounter a historical failure in the general election and only get 35% of the votes. And three months ago, this model showed that Trump was able to obtain 55% of the votes, the gap is quite wide.

The report of the model clearly stated that the economy has become an insurmountable obstacle for Trump. Only economic miracles can help Trump. It should be noted that since 1948, except for the general elections of 1968 and 1976, the model accurately predicted the results of the vote every time. So, unless a miracle occurs, Trump's defeat is a foregone conclusion. 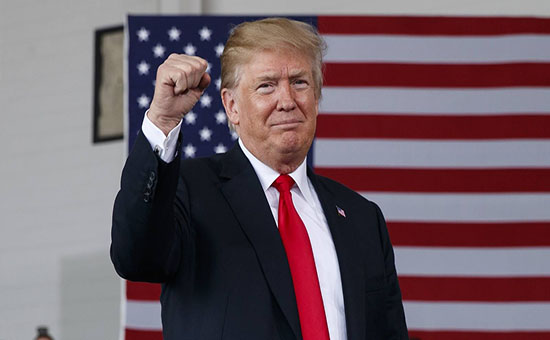 Is a miracle so easy to happen? According to the current overall situation in the United States, there is no possibility of a miracle. The epidemic has blocked everything. Now that the epidemic in the United States has not passed, Trump hastened to resume work. The controlled states did not hesitate to create fake data to deceive the public, but as a result, the economic recovery was slow, and the epidemic rebounded.

Such a situation cannot be changed in a short period of time. After three months, a new wave of the epidemic has come back. At that time, let alone restoring the economy, it is still unknown whether it can withstand the wave of the epidemic. Even if there are no economic problems, not many people will vote for Trump.