Sterling fell to a new two-and-a-half-month high against the dollar, and Brexit negotiations remained the focus of the market

Abstract:Sterling against the US dollar maintained a volatile upward trend, with the exchange rate hitting a high of 1.2689, a new high of two and a half months.

On Friday (June 5th) during the European session, the British pound maintained a volatile and rising trend against the US dollar. The exchange rate reached a high of 1.2689, setting a new two-and-a-half month high. Since then, the currency pair has retreated somewhat, and the market is waiting for the US non-agricultural employment report later. At present, the currency pair is still performing strongly and has recorded six consecutive trading days.

At present, the market is still paying close attention to the Brexit negotiations between the United Kingdom and the European Union. British leaders hope to achieve results in October, and they do not hope that the transition period will not be extended. Under such a background, the negotiations between Britain and Europe have reached a deadlock. In addition, the US non-agricultural employment data to be released later is also the focus of market attention.

Whether it is the British rejection of the fisheries clause or the EU’s refusal to open up single-market access, so far, no substantial progress has been made in the key round of Brexit negotiations. There are other stumbling blocks in the negotiations, such as regional legislation, and Britain’s refusal to extend the deadline for negotiations, which has led to the current stalemate.

On the other hand, German Clause Ambassador to the European Union Michael Clauss said on Thursday that if Britain wants to reach a free trade agreement with the EU, it must give up some sovereignty.

In addition to Brexit, the coronavirus treatment of the Conservative government has also been attacked. According to Tony Prestedge, COO of the National Health Service (NHS) program, the controversial UK contact tracking application may not be complete before September.

In view of the last day of the key Brexit negotiations round, in the absence of major data from the UK, any latest news on Brexit is important for the GBPUSD pair.

Similarly, monthly employment data from the United States and news about the international trade situation may become additional instructions to traders. Current market forecasts show that the US data is frustrating, but the trend of the pound against the dollar may be limited by the uncertainty of Brexit and the sentiment surrounding the UK's response to the epidemic. 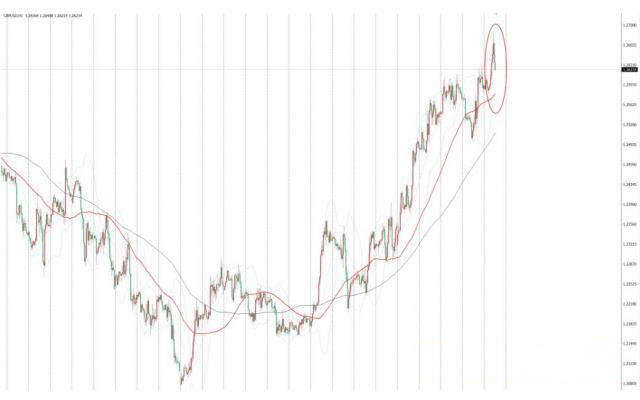 Technically, the bearish divergence of GBPUSD against the 4-hour chart has increased. From May 29 to the current uptrend line remains intact, which is immediate support. In addition, if the currency pair stabilizes in the 1.2640/50 area, it is expected to challenge 1.2700, while also targeting the February 2020 low of 1.2725.

The foreign exchange strategist of UOB Group pointed out that the pound may try to reach the 1.2700 mark in the next few weeks.

The bank analyst pointed out that in the next 1-3 weeks, although our optimism about the pound is correct, our expectation for Wednesday (June 3, spot price is 1.2580) is 1.2650 may be relatively fast Appeared in the market, this expectation has not been realized. The upward momentum has slowed down a bit, but only a break of 1.2480 indicates that the positive phase has ended. Until then, it is still possible to rise to 1.2700.