The number of hospitalizations and deaths in the United States has risen again, and the pressure on young people as the “new workhorse” of infection has doubled

Abstract: Affected by the restart of economic activities, the number of people infected with new coronary pneumonia in the United States has been pressed since July. According to the latest data, there were more than 80,000 new cases in the United States on Wednesday (July 22), and among these infections, the majority of young people stood.

Affected by the restart of economic activities, the number of people infected with new coronary pneumonia in the United States has been pressed since July. According to the latest data, there were more than 80,000 new cases in the United States on Wednesday (July 22), and among these infections, the majority of young people stood.

Since mid-July, the number of hospitalizations and deaths in the United States has hit new highs

In the context of the economic restart, restaurants, bars, nightclubs and other business establishments opened, coupled with continuous various protests and demonstrations, young people have gradually become the "new main force" for infection.

Local officials who support the early opening of various places emphasized that this phenomenon shows that even if the epidemic rebounds, it will not be as severe as a few months ago, because most young people are asymptomatic infected or mildly ill, and do not need hospitalization or treatment. Will cause too many Americans to die.

However, since mid-July, the number of hospitalizations and deaths in the hardest-hit areas of the epidemic has also hit new highs, making the above argument untenable. 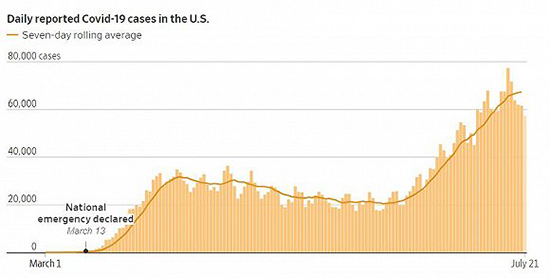 Reuters statistics show that on Tuesday (July 21) local time, the number of deaths due to the new crown virus in the United States increased by more than 1,000, the largest increase in a single day since early June.

In the week ending July 19, the number of deaths in the United States exceeded 5,200, an increase of 5% from the previous week, marking the second consecutive week of rising deaths.

Experts warn that with the record surge in new cases and the surge in hospitalizations in many states, the cumulative death toll may also surge. 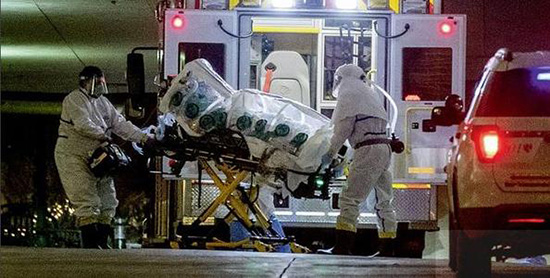 However, after states restarted economic activities prematurely, according to Reuters statistics, the death toll in 21 states including Arizona, Florida and Texas has risen again in the past two weeks.

The main reason for this trend is that young people accounted for an increasing proportion of newly infected people in the early stages of the unblocking of each state, and their probability of death from illness was relatively small. In addition, a wider range of testing means that patients can find out that they have been infected earlier, and the time from diagnosis to death is also extended. However, as time went by, the severely ill patients among the large number of new patients began to die, and the death toll soared again.

At the same time, since July, 17 states across the United States have reported that the number of new coronary pneumonia patients being hospitalized has hit a new high, including Alabama, Texas, and California in southern areas hardest hit by the epidemic.

On Tuesday, local time, three months after the briefing on the epidemic was suspended, Trump returned to the podium and urged people to wear masks. He also predicted that the epidemic will become more serious. 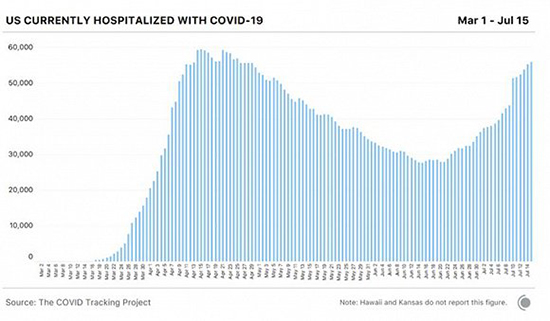 "Some areas in the United States are doing very well, while others are worse," Trump said. "Unfortunately, the epidemic may get worse before it gets better. Although I don't want to say that, it's true. "

The model of the Institute of Health Indicators and Evaluation of the University of Washington predicted in early July that by the US election day in early November this year, the number of deaths in the United States may reach 208,000.

The model is often recognized by the White House because of its optimistic forecasts. But Christopher Murray, the director of the Institute, now believes that because localities are unwilling to implement new restrictions and schools are about to start in the fall, it is expected that the number of new cases and deaths in many states will increase significantly in September and October. increase.