More than 50,000 new cases in a single day in the United States

Abstract: On Thursday (July 2) local time, there were more than 50,000 newly diagnosed cases of new coronary pneumonia in the United States. Previously, it took more than two months for the cumulative diagnosis of more than 50,000 in the United States. Today it only takes one day, which makes many people worry about the epidemic. The second rebound may overshadow the economic restart. The surge in newly diagnosed cases also forced some states to issue "mask mask orders" and stop economic renewal plans.

On Thursday (July 2) local time, there were more than 50,000 newly diagnosed cases of new coronary pneumonia in the United States. Previously, it took more than two months for the cumulative diagnosis of the United States to exceed 50,000. It only takes one day now, which makes many people worry about the outbreak. The rebound may overshadow the economic restart. The surge in newly diagnosed cases also forced some states to issue "mask mask orders" and stop economic renewal plans.

Due to the surge in the number of infections, several states issued “mask orders” to force people to wear masks

According to the Johns Hopkins University outbreak real-time monitoring system, as of 6 p.m. on July 2, there were 2.73 million cases of new coronavirus infections in the United States, including more than 120,000 deaths. Compared with the data of the system about 24 hours ago, there were more than 50,000 new infections and 700 new deaths in a single day in the United States. 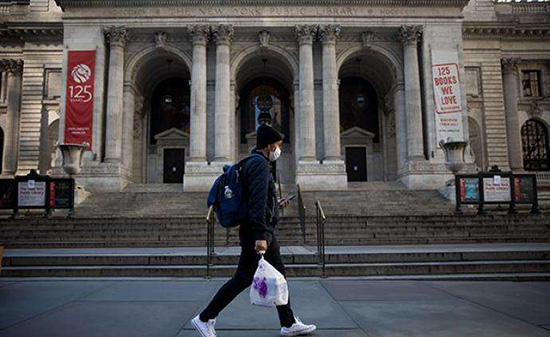 The surge in newly diagnosed cases has forced some states to issue a "mask order" to slow the spread of the virus.

Following California’s announcement of the statewide “mask order” on June 18, on July 2, Texas Governor Greg Abbott also issued an almost statewide “mask order”, requiring 20 or more cases. In counties with case numbers, residents must wear masks when they cannot maintain a social distance indoors and outdoors in public places. The first violator will receive a written or verbal warning, the second violator will be fined up to $250, and each subsequent violation will be fined up to $250. The order will take effect at 12 noon on the 3rd.

However, the Texas "Mask Order" provides a few exceptions, such as children under 10 years old, people who cannot wear masks due to illness, people who eat or drink, and those who exercise outdoors, may not wear masks.

It is worth noting that the order also made provisions for participants in protests and demonstrations-anyone who participated in more than 10 protests or demonstrations and could not maintain a social distance cannot be excluded.

"The new coronavirus has not disappeared." He said, "In fact, the situation is worsening. Now more than ever, everyone needs to take action until the diagnosed patients can get treatment." 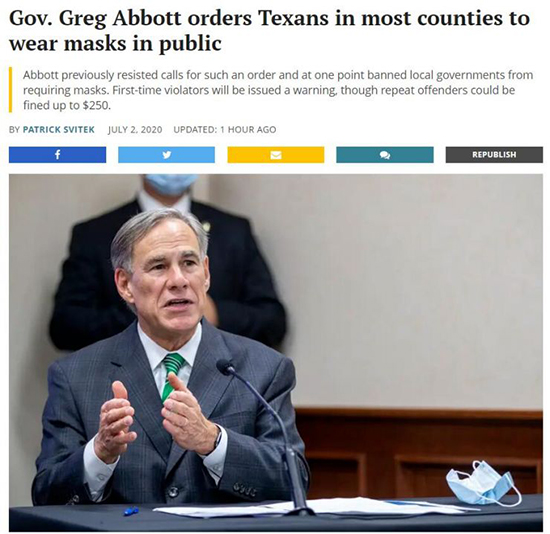 Abbot reiterated his refusal to resume the "home order" in April. He said that the people of Texas "must do more to slow the rate of propagation, without letting Texas re-block." He also said that his latest announcement was not a "home order" but "only acknowledges reality : If you don’t go out, you are unlikely to meet someone infected with the new coronavirus."

"We are now at the point where the virus is spreading so fast, there is almost no room for error." He said.

The day before the "mask order" was issued, the number of new cases and hospitalizations in Texas in a single day reached a new high. On July 1, the state added 8,076 confirmed cases, an increase of more than 1,000 cases from the previous day. The number of inpatients reached 6,904, setting a new record for the third consecutive day. The positive rate of the new coronavirus nucleic acid has risen to about 14% in recent days, close to the previous highest point, and as long as this ratio is higher than 10%, it will sound the alarm to restart the economy.